THE ASSUMPTION OF MARY

The Assumption of Mary Facts 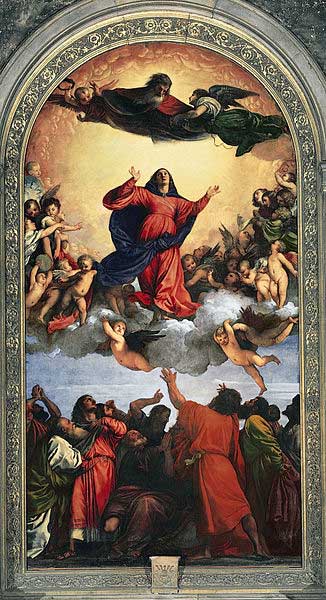 The Assumption of Mary is a Christian festival celebrated every year on 15th August in most part of the world. Christians believe, on this day the Virgin Mary "having completed the course of her earthly life, was assumed body and soul into heavenly glory."

In ancient culture The Assumption of Mary is celebrated by public illumination and night time bonfires. In some other cultures people throw coins from their window down into the street and considered it as an idea of prosperity. There are many symbolic images and pictures associated with that event. Most people believed the color blue is associated with the Virgin Mary as it is the color of Heaven and symbolizes truth and clarity. Christians mostly associate Lily with the Virgin Mary because it is the symbol of purity, simplicity and divinity.

Different countries in the world celebrate The Assumption of Mary in different ways. In Italy and in the United States it is celebrated by decorating streets with different colors of light and firework displays. In Rome the bowing procession is the most important event of the day. People take the statue of the Virgin Mary through beautiful archways of flowers to a group of people that hold a statue of Christ symbolizing his awaiting for her to arrive in Heaven. In Brazil the feast called "Our lady of Navigators" is very popular. In Italy people take rides through the lakes in which they sprinkle roses and water over them and is considered as a symbol of prosperity. This Day is also considered as a monumental holiday in France.

The Assumption of Mary is a very popular summer festival in Greece and some of its surrounding islands. In the country of Andorra it is a widely celebrated festival where natives pray for the Mother; it also has become a national holiday in Andorra. This Day also became a public holiday in Guatemala where people and their families hand out gifts, food and other items as well as have parties, elaborate feasts and just enjoy spending time together. The Assumption of Mary is celebrated by the Christian community all over the world through many different traditions and customs. This festival is a sign of love and harmony, and is respected as a sacred festival.

The Assumption of Mary Observances