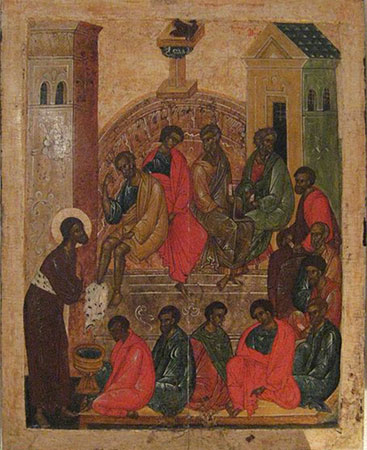 Maundy Thursday is a Christian festival celebrated by Christians around the world, especially in countries dominated by Christianity such as large parts of Europe, USA etc. The day is celebrated on a Thursday before Easter and usually falls in the early parts of April. The day is celebrated to commemorate the occasion of Last Supper of Jesus Christ, as described in the Bible, whereby Jesus shared a meal with his disciples a day before his crucification.

The word Maundy is believed to be derived from the word "mandatum" which literally means commands, and this refers to the commandments given by Jesus to his disciples on this day. Maundy Thursday is perhaps one of the oldest holy traditions in Christianity with evidence of the day being observed from medieval times itself. In olden days, the festival was better known as Shere Thursday, with Shere literally translating to "guilt free".

Back then, Christians believed that penance on this day was the way to get rid of all the sins and to achieve purity of the soul. Baptism was also strongly related to the day, and the tradition continues to this day in some parts of Europe.

The ways of celebrating Maundy Thursday differ from region to region. Generally speaking, it is a more solemn festival as compared to Easter, with people spending their time praying and doing communal service. Although over time, the festival has lost its significance, with many churches around the world not celebrating the day, there are still some who celebrate the day with all its traditions and customs.

A tradition associated with this day which is common across all the churches is the act of washing feet of the old and the ill. This ceremony is a replication of what, according to Bible, Jesus Christ did on this day. According to Bible, Jesus Christ washed the feet of his disciples on this day to show his love for humanity. Apart from that, Bible also states that Jesus shared bread and wine with his disciples, and that's why, an important tradition of Maundy Thursday is communion service.

Most churches on this day organize mass communions on this day, with people helping feed the poor, the old and the ill. In some parts of the world, such as England, there are unique traditions associated with the day such as distributing purses to the poor.

List of National and Regional Public Holidays of Philippines in 2023