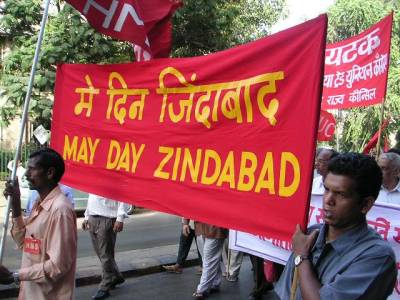 May Day also known as Labour Day or International Workers' Day celebrated every year on 1st May. This day is a national holiday in more than 80 countries and also celebrated unofficially in many other countries.

May Day originates from the United States labor union movement in the late 19th Century, particularly the eight-hour day movement, which advocated eight hours for work per day. In Late nineteenth century the working conditions were severe and unsafe. Working people had to work 12-16 hours per day. In 1884 the FOLTU (Federation of Organized Trades and Labor Unions) which later became the American Federation of Labor passed a resolution that "eight hours shall constitute a legal day's labor from and after 1st May, 1886". By 1886 around 250,000 workers were involved in the eight-hour Day movement. On 1st May, 1886 several labour unions across the US went on strike, demanding a standard eight hours of workday. On 4th May there was bloodshed in Chicago's Haymarket, a bomb was thrown by a revolutionist led to the deaths of a dozen of people and the injury of over 100 people. Five years later this day is recognized as a holiday by a socialist organization.

May Day is celebrated to pay tribute to the contributions, workers have made to make the world strong and prosper. This day is dedicated to the workers for their economic and social achievements.