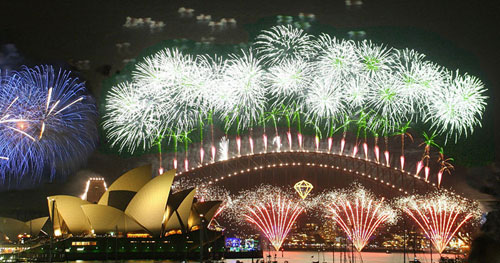 This day is believed to have a Romanian origin. Janus, the God of beginnings after whom the month January was named, was the one to whom the day was dedicated. Janus had two faces- one at the front and the other at the back. Thus, the tradition of celebrating New Year's Day came to be associated with paganism.

In some cultures, New Year's Day coincided with the Annunciation of Jesus. However, the tradition was condemned by various religious leaders. It is believed that the current tradition of exchanging gifts on New Year's Day originated in the 7th century when people of Netherlands and Flanders celebrated the day. Most of the Western world adopted January 1 as the New Year's Day, also called the Circumcision Day, even before they adopted the Gregorian calendar. The Circumcision Day is associated with Jesus Christ.

Different countries celebrate the New Year's Day differently, but almost all the celebrations start from December 31st itself, beckoning the New Year with a fervent countdown. In countries like the US, Australia, Malaysia and other European and Western cultures, people congregate at a place to watch fireworks as the New Year's Day descends.

In many parts of the world, music concerts are arranged to celebrate the going of the old year and the beginning of the New Year. In countries like the UK and Netherlands, people often run into water, also known as Polar Bear Plunges, to celebrate New Year's Day. Certain parts of the world have specific traditions associated with the day. For example, in Scotland, the street party on this day is very famous. In Switzerland, there is the tradition of organizing the finals of Spengler Cup Ice Hockey Tournament on New Year's Day.

The eve of the day sees people reveling in music, enjoying liquor and food and dancing till the wee hours of the morning. Radio shows and TV shows are organized specifically to remember the year gone by and to beckon the New Year.