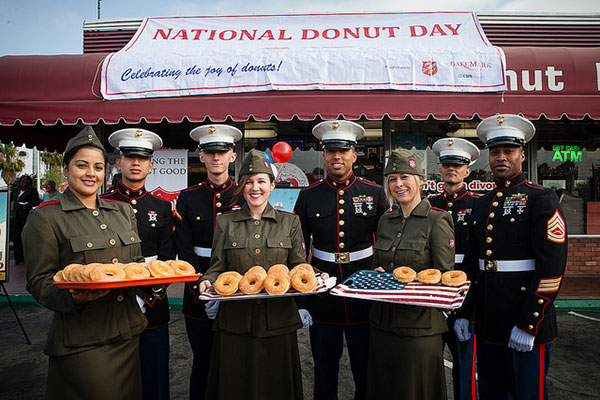 What is National Donut Day?

Margaret Sheldon and Helen Purviance were two Salvation Army volunteers who came up with the idea of providing dounuts for the soldiers during the World War I. The donuts were a symbol of motherhood and home. This idea was deeply appreciated by the soldiers and soon the women who were involved in this work were nicknamed "Doughnut Girls".

Since the establishment of the holiday, the donut manufacturers and other related retailers rejoice by handing out free or discounted donuts to the customers on this day.

Donut and the history behind it

Doughnuts / donuts are made of sweet dough that is deep-fried and sweetened. They are characteristically round with a hole in the centre. There are many varieties flavours, shapes and sizes of donuts. These include cinnamon twist donuts, fritters, centre filled donuts, glazed donuts, chocolate covered donuts and sour cream donuts.

The origin of the donut is not clear however the unique shape made an appearance in the United States around the mid-1800's. It is said that Hanson Gregory was instrumental in introducing this shape as a result of distaste for the raw cores and oiliness of the original shapes of the donuts. He is said to have obtained the shape by pressing the centre to make a hole in the centre with a tin pepper box.

When is National Donut Day Celebrated?

National Donut Day is an unofficial holiday that occurs every year on the first Friday of June. This originated in US and has been adopted in other countries like Canada, Australia and UK.

What is the correct spelling - Donut or Doughnut?

Although Doughnut is the original, old-school spelling, Donut is a shorted version that has been made popular by Dunkin Donuts.

Are there other donut holidays?

How to celebrate National Donut Day?

With the rise of marketing gimmicks that try to cash in on the popularity of the holiday, the significance of this holiday is lost to history. This day is now just seen as a day to cash in on free donuts from major donut chains. You can grab your favourite donut from donut stores like Krispy Kreme and Dunkin Donuts that offer free donuts on this day.

You can volunteer to help at the events and fundraisers conducted by the Salvation Army at your location and experience the spirit of giving back to the society. Your time and donation towards the Salvation Army can help and ensure that they can continue to sustain their efforts to spread goodwill through their work around the world.

Hashtags like #NationalDonutDay and #NationalDoughnutDay can help you keep up with the latest news and deals about the festivities and other related posts on social media.

You can make donuts at home or pick up a donut box from the store to share with your near and dear ones. It is a way to get together with family and bring in a feeling of togetherness.