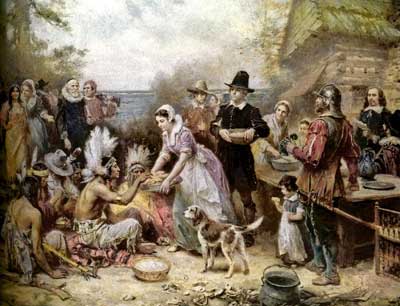 Thanksgiving Day bears its origin from the harvest festival. Generally, Americans give thanks to God for their autumn harvest and every other success they have achieved in the year. Thanksgiving Day in the US is observed on the fourth Thursday in November. The day was declared a federal holiday by Abraham Lincoln in 1863. It is also a day off to American workers.

Thanksgiving Day origin dates back in the 16th century when the first Thanksgiving dinner took place in Texas.

According to historians, a sailing vessel called Mayflower crossed the Atlantic carrying about 102 pilgrims. The journey was arduous because of terrible storms in the sea. The passengers comforted themselves by singing.

After 66 days, they arrived in Plymouth and could not proceed to their initial intended destination, Virginia because of bad weather. In fact, about 46 pilgrims died in the cold winter. The survivors learned how to grow food from Squanto, a native Indian. However, a severe drought followed and the pilgrims dedicated themselves to fasting and praying to ask God for a bountiful harvest. Their prayers were answered by rains that grew their corn, beans and pumpkins.

In the autumn of 1621, Governor William Bradford organized a 3-day feast to thank God for his favors. Although there is no evidence provided, it is believed that this was the first Thanksgiving Day by the Pilgrims. In the following years, such events became quite common and were celebrated every year. On October 3, 1789, the first president of the United States, George Washington proclaimed the day of thanksgiving. The day was later declared a public holiday in 1863 by the then President Abraham Lincoln.

Americans observe Thanksgiving Day on the fourth Thursday of November every year. The day is usually preceded by the Black Friday. This makes an ideal time to start Christmas shopping. Why is Thanksgiving in November?

Which Food Is Eaten On Thanksgiving Day?

Turkey is the most common food served during the Thanksgiving Dinner. For this reason, Thanksgiving Day is also called the Turkey Day. American farmers raise millions of turkeys every year in preparation of the Thanksgiving Holiday. Other common meals on this day include potatoes, pumpkin pie, cranberry sauce and an assortment of vegetables. Why Thanksgiving is celebrated?

It is a day to thank God for a bountiful harvest in the preceding year. The day also appreciates the labor of all Americans in their various income generating activities and achievements as a nation. Families and friends meet to share and celebrate their milestones as well as their accomplishments.

How to Celebrate Thanksgiving Day?

The day is often full of pomp and color. It is a great time to exchange gifts with your loved ones and share beautiful Thanksgiving messages. If you would like to please your family and friends, get a special Thanksgiving menu and Turkey, potatoes and a variety of vegetables. If you are looking to travel out of town, you can attend Macy's Thanksgiving Parade in New York City and enjoy lively performances. Usually, the parades mark the official opening of Christmas shopping.

Although Thanksgiving Day has been observed for more than four centuries, its traditions continue to date. Family reunion and feasting are common as everyone offers prayers to God for His continuous grace. Thanksgiving ceremony is considered incomplete without turkey. Watching NFL football and playing Thanksgiving games such as scavenger hunt and picture puzzle is also a popular tradition on this day.