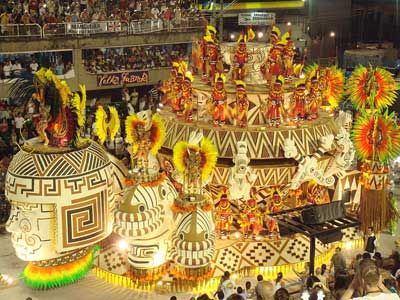 The Carnival is celebrated in Brazil every year, 46 days before the Easter festival. Carnival is derived from the word carnelevare, wich literally translates to "removal of meat". The roots of the festival are believed to be in the tradition of Roman Catholics when they abstained from meat and alcohol on certain days as a method to drive away bad things from their life.

The Carnival in Brazil as we know it today is believed to have originated during the European dominated era. Back then, followers of the Roman Catholic Church would indulge in last day of dance, fun, alcohol and sex just before the start of Lent, which is a period of abstinence from alcohol and other sins. Back then, people would exchange clothes and indulge in wild dancing, and it also sometimes coincided with exchange of slaves.

Carnivals are celebrated in many countries but the one in Brazil is most famous. Different cities of Brazil have their own way of celebrating this week long festival of revelry and fun. However, the most famous carnival is that of Rio De Janeiro. Thousands of people throng the Sambodromo stadium in the city. Often wearing masks and colorful costumes, they dance to the beats of drums and music, Samba being the most prevalent form of dancing here.

A major parade with beautifully dressed samba dancers atop a decorated moving vehicle goes through the stadium as hundreds of people keep joining the parade as the parade makes its way.

Another city which is famous for its Carnival in Brazil is Salvador de Bahia. The original capital in Brazil, carnival is celebrated a little differently here. Street carnival is celebrated in this city rather than having a stadium as a venue for the parade. Thousands of people throng the streets from early dawn and dance their way through the city till late evenings. Carnival in Salvador also lasts a little longer than in Rio.

Carnival in Brazil is a major holiday when people shut shops and come out on the streets to celebrate life. The festival is organized by various samba schools in the country which are also involved in various community services. Even people with two left feet can be seen enjoying this festival in its full splendor.

List of National and Regional Public Holidays of Brazil in 2023