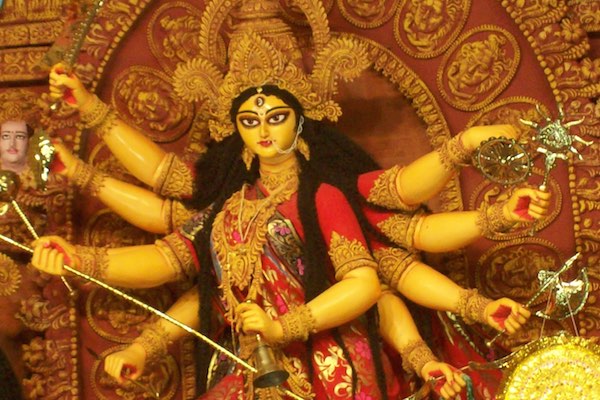 "India is the cradle of human race, the birth place of human speech, the mother of history, the grand mother of legends, and the great grandmother of traditions" --Mark Twin

Social customs and traditions are the essential element of Indian culture. No where else on the earth the natural and spiritual worlds are so intertwined as in India. This is the place where fire and air, animals and trees, mountains and rivers are revealed as Gods. One of the most powerful in these natural deities is the Goddess Durga- the Goddess of power, energy and strength. In Indian mythology, deity Durga is the energy aspect of Lord, which helps God to proceed with the work of creation, preservation and destruction. She is embodiment of purity, knowledge, and truth. It is mentioned in the oldest and the most important scriptures of India that "Mother, you have created this Universe. You are the strength of all (god and sages). Without you Lord has no expressions".

Navarati or Navadurga Parva is the festival, dedicated to the Hindu deity Durga as a destroyer of evil and misery. These auspicious nine days are celebrated all over the India, when nine forms of goddess Durga, Bhadrakali, Sarvamangla, Bheravi, Chandika, Lalita, Annpurna, Amba, Bhavani and Durga are worshipped each day. In north India, people celebrate Navaratri by worshipping the idols of deity Durga. In Bengal, decorative Pandals are made, where devotees visit for the blessings of goddess Durga. In Gujrat, the nine nights of this festival are celebrated by performing Garba. In South India, during this festival 'Golu' is celebrated in which various kinds of clay dolls are decorated on the nine steps of Kolu. This festival is very popular in the states of west Bengal, Orrisa, Bihar, and Utter Pradesh.

This festival is also popular by other names as Dusshera and Durga Puja.The word "Navaratri" means 'nine nights in Sanskrit, nava meaning nine and ratri meaning night. During these ten days we invoke the energy aspect of goddess Durga in the form of universal mother. Navaratri in India follows the lunar calendar and is celebrated in March/April as Chitra Navaratri and in September/October as Sharad Navratri.

As per the Hindu Holy scriptures, this festival has a rich historical and cultural background. Hindu mythology tells an interesting tale of the fierce battle of Durga and Mahishasura who harassed devas and humans. Deity Durga, destroyed the demon on the ninth day of the battle. All the humans and devas rejoiced her victory. From that day the tenth day of the navratri is celebrated as "Vijyadasmi". In the Hindu epics, Ramayana and Mahabhatra there are various refrences of deity Durga. In Ramayana, Lord Rama worshipped deity Durga before starting for his battle with Ravana to get her blessings. In Mahabharta, Lord Krishna also advised Arjuna to worship goddess Durga to ensure his victory in the battle of Kurukshetra.

Thus, the nine nights of Navaratri are considered as the most auspicious days in Hindu culture. This festival is also a reminder that evil can never triumph over the power of truth.