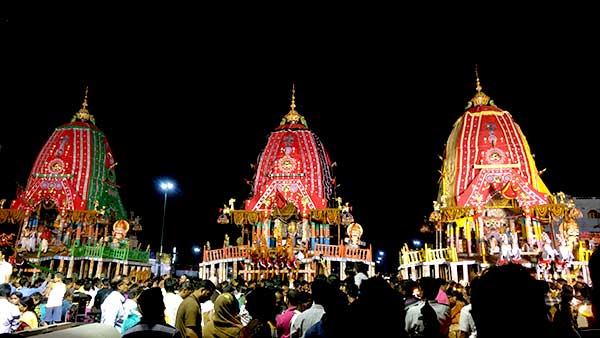 Ratha Yatra is a major Hindu festival associated with Lord Jagannath (avatar of Lord Vishnu) held at Puri in India during the months of June or July.

The Puri Rath Yatra is world famous and attracts more then one million pilgrims every year, not only from India but also from the different parts of the world. Rath Yatra in other words the Chariot Festival is the only day when devotees who are not allowed into the temple can get a chance to see the deities. This festival is a symbol of equality and integration.

The 3 deities, Lord Jagannath, his elder brother Lord Balabhadra and their sister Subhadra are worshipped within the temple, on this festival they are taken to the streets of Puri so that everyone can have the fortune to see them. The 3 deities make an annual journey to their aunt's temple (Gundicha Temple), 2 km away from Lord Jagannath temple.

The Jagannath Temple in Puri is one among the four most sacred temples in India. The other three are: Rameshwaram in south, Dwarika in west and Badrinath in north.