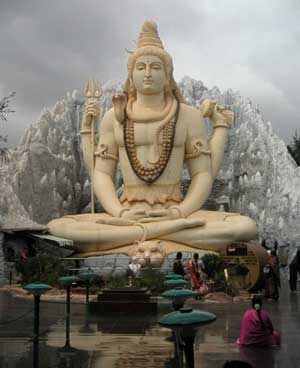 Maha Shivratri, which literally translates to "great night of Shiva" is a Hindu festival largely celebrated in India as well as in Nepal. The festival is celebrated on the new moon day in the month of Maagha according to the Hindu calendar. The day is celebrated to venerate Lord Shiva, an important deity in Hindu culture.

There are many mythological legends associated with this day. According to a popular legend, when a hunter could not find anything to kill for his food in a forest, he waited on the branch of a Woodapple tree. In order to attract deer, he started throwing the leaves of the tree on the ground, unaware that there was a Shiva Lingam beneath the tree. Pleased with the Woodapple leaves and the patience of the hunter, it is believed that Lord Shiva appeared in front of the hunter and blessed him with wisdom. From that day onwards, the hunter stopped eating meat.

Another legend has it that after the Earth was faced with an imminent destruction, Goddess Parvati pledged with Lord Shiva to save the world. Pleased with her prayers, Lord Shiva agreed to save the world on the pretext that the people of the Earth would have to worship him with dedication and passion. From that day onwards, the night came to be known as Maha Shivratri and people began worshipping Shiva with a great enthusiasm.

Some folklore also consider this to be Shiva's day as this was believed to be the answer given by Lord Shiva when asked about his favorite day by Goddess Parvati.

Maha Shivratri is a Hindu festival which is celebrated by people following Hinduism in India. People often fast on the night of Shivratri and sing hymns and praises in the name of Lord Shiva. Hindu temples across the country are decorated with lights and colorful decorations and people can be seen offering night long prayers to Shiva Lingam. Woodapple leaves, cold water and milk are offered to the Shiva Lingam on this day as they are believed to be Lord Shiva's favorite.

It is believed that the people who fast on this night and offer prayers to Lord Shiva bring good luck into their life. The most popular Maha Shivratri celebrations take place in Ujjain, believed to be the place of residence of Lord Shiva. Large processions are carried out throughout the city, with people thronging the streets to catch a glimpse of the revered idol of Lord Shiva.