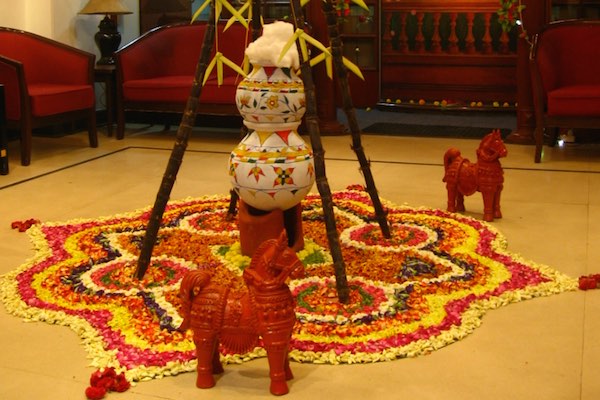 The first value which is underline in Indian culture is the faith in God and his supreme powers. In Indian mythology, it is believed that the life of man has to be laid under the very eye of God. God is blessing us in each and every moment. So every celebration becomes an auspicious day for Indians, when people thank God for his blessings.

Festivals are the key stone of the arch of Indian social life. They have been the foundation of the Hindu society through the ages. They are the celebration of life and bring peace and joy to the masses. They add values and sentiments in the society. Gather together under one roof brings human bonding among the people. Thus, traditions, festivals and customs, these are the mental chains that binding our nation.

India is mainly an agricultural country. There are many festivals which are dedicated to harvest and to Mother Nature. Pongal is one of them. Pongal is a harvest festival, it is a special occasion for giving thanks to nature for giving us grains. It holds a special significance for the farmers. It is a most popular Hindu festival, celebrated all over the India by its different names. In south, it is known as Pongal, MakerSankranti in entire north, Lohri in Punjab,Bhogali Bihu in Assam and Bhogi in Andhra Pradesh. This four day long harvest festival "Pongal" is mainly celebrated by the Tamil people in Indian state of Tamil Nadu, the Union Territory of Puducherry and Shri lanka.

The harvest festival Pongal, falls around 14th of January. This day marks the start of sun's six month long journey to northwards. Pongal is mainly celebrated to convey gratitude to the sun God for providing the energy to agriculture and to the God Indra, the God of rain to providing the timely rain for crops. The festival takes its name from the Tamil word meaning "to boil" of milk and rice during the month of Thai. Boiling the first rice of the season is traditionally dedicated to God Sun - the Surya Maangalyam.

The Pongal is the four day- long celebration of the year. So the first day of the festival is celebrated as Bhogi festival in the honour of lord Indra, (the God of rain).Prayers are offered to lord Indra for timely rain and bountiful harvest. Another ritual which is performed on this day is called Bhogi Mantalu. Traditionally, all the useless household articles are thrown into the fire made of wood and cow-dung cakes. The burning of all that is old is symbolic of starting of a fresh new year. On the second day, lord Sun is worshiped by the people. As per the ritual rice are boiled with the milk outdoor in an earthen pot which is offered to lord Sun. People wear traditional clothes and sing and dance in the praise of God. The third day of the celebration is known as "Mattu Pongal". As farmers cultivate their lands are depend on cattle, so they honoured and worshiped by the farmers on this day. The fourth and the last day of this festival are celebrated as "Kannum Pongal". On this day, lord Ganesha and Goddess Parvati are worshipped.

Thus the festival of Pongal brings happiness and peace for all. It is a festival when God is praised with simple faith and sincerity.