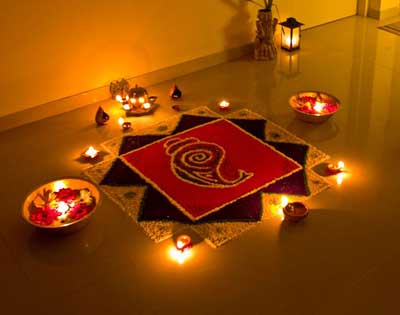 Diwali is a major festival of India. It is celebrated on a new moon night sometime in the months of October and November. The exact day of the festival is decided according to the Hindu calendar. The day is primarily celebrated to commemorate the return of Lord Rama from his 14 years of exile. However, there are various other stories associated with the festival.

According to popular legend, when Lord Rama returned from his 14 years of exile after defeating Raavana, the people of Ayodhya lighted candles and diya to celebrate his return to the kingdom. The festival gets its name from the lines of diya that were celebrated the return of Lord Rama, and hence the name Deepavali, literally translating to "lines of light." The name has gotten convoluted to Diwali over the years. This day symbolizes the victory of light over dark.

According to other legend, Pandavas from the Mahabharata returned to their homeland after 13 years and the day is celebrated to commemorate their return. The Sikhs celebrate this day to mark the day of freedom or the day when their Guru, Guru Hargobind got free from the jail. The Jains celebrate this day as they believe that Lord Mahavira attained enlightenment on this day. There are still other theories associated with Diwali such as the rising of Goddess Lakshmi from the sea, the killing of Narkasura by Lord Vishnu and birth of Goddess Kali.

The event is largely celebrated in India. Indians celebrate this day as the start of the new business year. People light up their homes 2-3 days prior to the festival and gifts are exchanged between friends and families. On the night of the festival, prayers are offered to Lord Vishnu and Goddess Lakshmi which is followed by bursting of fire crackers eating of sweets and other gourmet food. However, people refrain from meat and alcohol on this day. Of late, a lot of clubs have started organizing special parties on Diwali for the young generation.

Although Diwali is largely an Indian festival, it is widely celebrated in other countries as well such as Malaysia, Sri Lanka, Singapore, Nepal, Myanmar, Maurititus and Fiji. In fact, Diwali is a national holiday in each of these countries.