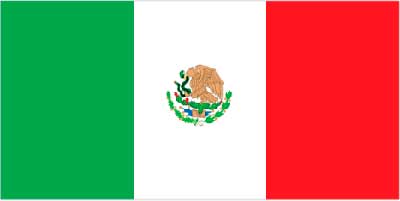 The Independence Day in Mexico is celebrated every year on 16th of September as the anniversary of the start of Father Hidalgo's revolt. Every year the celebration begins on 15th of September, at 11 pm in Mexico.

On 16th September, 1810, the priest Father Miguel Hidalgo y Costilla started a revolt against Spanish rule. On this day he rang the church bell to gather the people of Mexico to rise up against the Spanish rule. This event is known as the Grito de Dolores. Mexico finally claimed its independence from Spain in 1821.

On the 15th September, at 11 pm the President of Mexico comes to the central balcony of Palacio Nacional(the National Palace), rings the bell (the same bell Hidalgo rang on 16th Sept, 1810) and cries to the crowd gathered in the huge city square and the crowd enthusiastically respond "iViva(n)!". This city square is decorated with flags, flowers and lights of red, white, and green. These are the three main colors of the Mexican flag. The green is on the left side of the flag and symbolizes independence. White is in the middle of the flag and symbolizes religion. The red is on the right side of the flag and symbolizes union. The celebrations continue on the 16th with ceremonies like parades, air shows, fireworks, musical concerts, bullfights and horseback rider performances.

All Mexicans are entitled to Independence Day off work except some emergency service workers. Mexicans proudly fly their tricolor Flag, recall Hidalgo's speeches, sing patriotic songs and enjoy the day with their friends and families.

List of National and Regional Public Holidays of Mexico in 2021