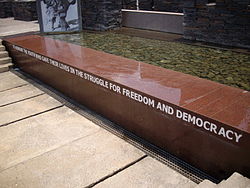 The grounds of the movement lay in a 1974 official order which made Afrikaans compulsory in schools. The order stated that Afrikaans be used in conjunction with English for teaching in schools. Certain subjects like social studies, mathematics and algebra were required to be taught in Afrikaans while others like home science and general science were required to be taught in English. The use of local languages was prohibited was these subjects citing a provision in constitution which laid down Afrikaans and English as the official languages of the country.

Afrikaans was largely seen by people as the "language of the oppressor" and it resulted in growing resentment in teachers as well as students. It was on April 30, 1976 when the resentment crossed all thresholds and the students of Orlando West Junior High School refused to go to school. On the morning of June 16, 1976, thousands of black students went on a protest rally from their schools to Orlando Stadium.

Although the rally was intended to be a peace protest, things soon got out of control and riots were seen all over the place. Hundreds of students were killed during the protest. Although this youth revolution did not see the taking back of the language order immediately, it did see a turning point in South Africa's liberation campaign which ultimately saw the downfall of the apartheid government there.

The Youth Day in South Africa is celebrated in memory of all the youngsters who lost their lives during the protest, especially the death of Hector Pieterson, a 12 year old student who was killed during the uprising. The day is celebrated with musical concerts around the country in order to celebrate the energy of youth. The day also sees various educational discussions being organized by school and college students around the country. Various youth oriented non- profit organizations also organize awareness campaigns on this day to make the youth of the country aware of the challenges in the current environment of the country. It was the Soweto Uprising which laid the grounds for the release of Nelson Mandela and the end of the Apartheid regime in the country.