When is International Friendship Day in 2023? 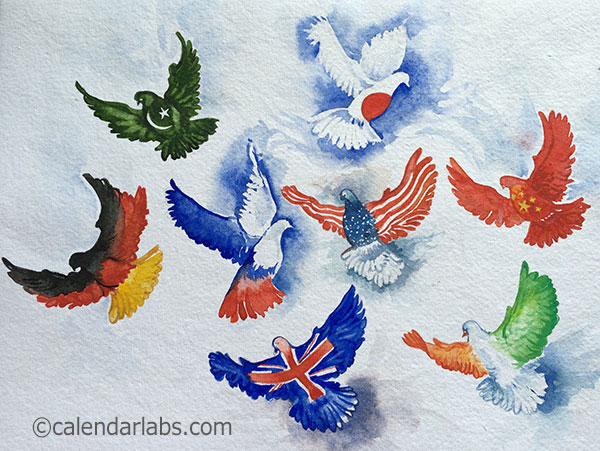 "The International Day of Friendship is an important opportunity to confront the misunderstandings and distrust that underlie so many of the tensions and conflicts in today's world. It is a reminder that human solidarity is essential to promoting lasting peace and fostering development. On this International Day of Friendship, let us cultivate warm ties that strengthen our common humanity and promote the well being of the Human family."
-- Ban Ki-Moon

The impact of scientific inventions and discoveries has transformed the face of world and turned this vast terrestrial globe into a "little neighbourhood". Economics has become international, and the old world doctrine of national self sufficiency has become an anachronism. Humanity has developed a common consciousness. There is a greater urge for human intercourse, a deeper longing for international understanding, amity and good will. There is everywhere greater awareness of human problems and difficulties and of the need of settling them on the basis of good will and understanding. Already two global wars have left deep wounds on humanity. Humanity endured the after effects of these wars and all nations come to realise that war solves no problems. The immortal words of Nazareth "Those who live by the sword shall perish by the sword" rings to greater force today than ever before. We have learnt that a new world can not be built on foiled ambitions, frustrated hopes and mass destruction. Our realisation is necessary. It is important that we must have to learn to co-existence or more than this a peaceful Co-Existence. The scientific devilry has provided deadlier instruments of destruction in the shape of Hydrogen bombs, rockets and missiles of ferocious range and intensity. Thus, Technological progress and scientific inventions have placed in the hands of mankind instruments of destruction which, if used, will make an end of civilization as we all know it and turn the world into a vast slaughter house. So Power in such a situation should be checked. In this difficult time, we are left with the only option of working towards a world where all the nations owe a common allegiance and where every human citizen lives a decent life. We have to leave the national rivalries, conflicting ideologies and aggressive ambitions. We must smoothen out our differences, harmonise diverse view points and develop a common out-look on matters which are concerned with our existence. Otherwise, the dream of a peaceful world will become a mirage.

The universal urge for peace and co-existence which marked the close of this global struggle found expression in the organization of United Nations. The United Nation is constantly trying to established peace in the world. UN considers and resolves the problems from the point of view of human progress and human welfare. During these agitated years through which the world has passed and is passing the UN plays a distinctive and historical role. The real problem in front of the organization is to create a new mentality which can developed a new attitude in every world citizen to realise that he or she and everyone like him or her is a member of a growing world community and that the progress of mankind involves in the welfare of mankind as a whole. In the development of such an attitude, on 27 April 2011 the general assembly of UN proclaimed 30 July as an official "International Day of Friendship" with the idea that friendship between people, countries and cultures can inspires peace efforts. So the International Day of Friendship is annually held on July 30 to celebrate friendship world wide. The day is also intended to support the goals and objectives of the declaration and programme of Action on a culture of peace and The International Decade for a culture of peace and non-violence for the children of the world. During, the early years of this conception the architect of this idea are insisting on the religion of humanity. They are trying to create a world without separatism, isolation, communalism and exploitation of man by man himself. The objectives and sprit underlying in the message of UN General Secretary, "Ban Ki-Moon" on the first International Day of Friendship; as he said, "United Nations President Woodrow Wilson once said" "Friendship is the only cement that will ever hold the world together. On the first International Day of Friendship, let us pledge to work together to strengthen that cement and build a peaceful, more prosperous world so old friendship can flourish and new ones can be made."

Friendship appeals to the emotions, sentiments and even passions of the people. So this sentiment can do a good deal to accelerate the process of a peaceful and united world. The concept of Friendship is a dynamic concept. It is both a sentiment and a movement- a sentiment which draws people together and a movement which binds them for common action. So it is basically and essentially required at the present time. The idea of friendship is indeed not new. In our ancient holy scripture this concept is laid down. It is mentioned in Bible that, "Two are better than one because they have a good reward for their toil. For: if one fall, another will lift up his fellow, but woe to him who is alone, when he falls and has not another to lift him up. Again, if to lies together, they keep warm, but how can one keep warm alone? And though a man might prevail against one who is alone, two will with stand him... a three fold cord is not quickly broken. India is the best country providing this concept for many years. Panchsheel message reflected India's constitutional vision of world order.

Thus the framers of this conception, however, have set our feet in the right direction. Now we have the assurance that the concept of one peaceful world will not remain an empty dream. They suffuse our new world with a glow of new hopes, where economic security, social equality and political freedom will exist in their true forms. But the success of this concept will depend not upon the excellence of the few. The concept has glorious possibilities. Only we must have to realise that there is no progress without vision and no freedom with out discipline. A great responsibility now lies on our shoulder as a member of one global community Please take the first step as a pioneers in the movement towards the ultimate establishment of the world of joy. So may be it is best to let the wheel of friendship grind faster. For it was a great poet and seer who foreseeing the impotence of this concept and wrote it in these immortal lines:

Where the mind is without fear and the head is held high;
Where knowledge is free;
Where the world has not been broken up into fragments by narrow domestic walls;
Where words comes from the depth of truth;
Where tireless striving stretches its arms towards perfection;
Where the clear stream of reason has not lost its Way into the dreary desert sand of dead habit;
Where the mind is led forward by thee into ever Widening thought and action Into that heaven of freedom.......