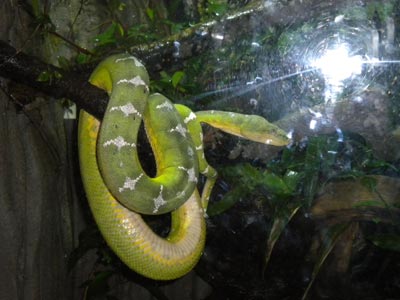 The 16th of July is celebrated as World Snake Day. Though a relatively obscure holiday with unclear origins, it is celebrated by wildlife enthusiasts the world over with great passion. Tributes sometimes even make the national news. Given human society's age-old fascination with these beautiful but misunderstood creatures, a day to celebrate them seems only fair.

This holiday is celebrated both virtually and physically, bringing together snake-lovers to rejoice in their common wonder at the marvels of nature's creation. In 1967 a Snake Farm was started in Texas, which was subsequently brought into popular culture in the 1970's through a song by the famous rock band the Ramones. Since then, its tourist appeal has only grown, and it has become an irresistible stop for many travelers on road-trips in the area. July 16th is, naturally, the busiest day of their year, and brings World Snake Day to the attention of many who would otherwise remain ignorant of it. Small NGOs capitalize on the day to conduct awareness programs about snakes for the general public.

An important contribution of World Snake Day is to the cause of conservation of a sometimes dangerous but mostly misrepresented reptile. Snakes live on every continent except Antarctica, and can vary from 32 feet long pythons to tiny vine snakes. Only about one-fourth of all snakes are venomous, and all of them would much rather avoid human contact if they could. Maximum snake bite incidents occur when humans inadvertently step on or otherwise disturb the peaceful creatures. India, with all its stereotypes of snake-charmers, is home to only four venomous snake species, but many destructive superstitions and myths. World Snake Day, conservationists hope, can help remove people's fears and illusions about snakes, and help them gain recognition as a marvelous adaptable apex species.

The sinuous muscles and sharp fangs of snakes have captured the imagination of human societies for centuries, with the earliest known carved representation nearly 12,000 years ago in Turkey. They have played a major role in religion and mythology, from the Bible to the Mahabharata to ancient Egyptian texts. Snakes play an important role in the ecosystem by controlling rodents and pests, and greater awareness can help raise support to understand these elusive creatures further. Common species are sometimes kept as pets, but in a rush for exotic species much damage can be done. For example, the species could become endangered, or be introduced to a new area by mistake, upsetting the ecological balance. The initial reaction on finding a snake for most lay-people remains fear and the desire to kill it. World Snake Day can be used as a tool to educate and inform people about how to deal with snakes, whom to call, resources available to them etc.